One dollar, One vote

Henry Stern, the founder and president of New York civic writes on his website: "Elections are the best way to decide public issues in a democracy. The word 'democracy' means 'rule by the people' , which is a fair and determine which policies a government should follow, and who should be elected to lead that government. A basic principle is one man, one vote" which is meant to support the idea that each citizen's influence should be equal. In reality, some people's influence is greater than others, no matter what system of reckoning is used. The most obvious barometer of influence is money. A man who can give a million dollars to a candidate is much more likely to be listened to than a contributor of $1. It would be impossible to write a law under which every citizen’s views would receive equal attention and respect. But it remains a legitimate goal of reformers to minimize the disparity in resources between candidates.The major distinction between citizens and interest groups lies in their access to candidates. A substantial amount of public business is transacted at fund-raising events for the benefit of individual candidates. Clearly, these events provide contributors with an opportunity to meet with the candidates they support and to try to influence them".

In economics, 'dollar voting' means a process of capital allocation through consumer sovereignty. Ludwig von Mises wrote (in Socialism, an economic and social analysis (1922), tr. J Kahane (1931), p 428 ) : "The capitalist society is a democracy in which every penny represents a ballot paper.

Obama has won the US elections with a moderate discourse. As the Economist points out, the American poor were hardly mentioned in his re-election campaign. In 2010, 15% of the American population live below the poverty line (around 44% of the median income), well above the OECD average of 6% (see chart below). 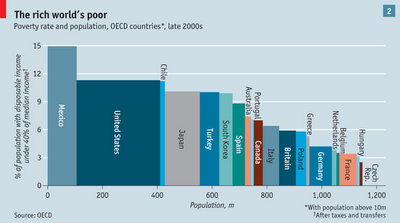 Anti-poverty programmes have allievated the impact of the crisis for the poorest 20% and helped consumer spending. Redistribution is not popular in Almerica, especially among Republicans who want to cut food stamps in order to reduce federal spending. Who defend the poor? Well, they don't have many lobbysts unlike banks or other industries.

The "one dollar, one vote" result provides an explanation for the increasing difference in the size of the welfare state in Europe and the US. The rise of the rich's income in the US has in fact allowed the rich to increase their political influence and get policy issues closer to their interests which is to limit redistribution to the poor and reduce the size of the welfare State. As a result , poverty has increased at a faster pace and redistribution lagged compared to Europe.

In the mid-50s, a plutocrat, H.L.Hunt had proposed a 'one dollar, one vote' system which would allocate votes based on the voter's wealth and 'contribution to society'. Nowadays, there are more sophisticated forms to increase political influence through money.  This contrasts sharply with equality of opportunity which was at the heart of the American identity. One dollar, one vote is the failure of democracy.

Email ThisBlogThis!Share to TwitterShare to FacebookShare to Pinterest
Labels: Various

The commentary in this blog is my own and does not in any way reflect the views of the European Commission.